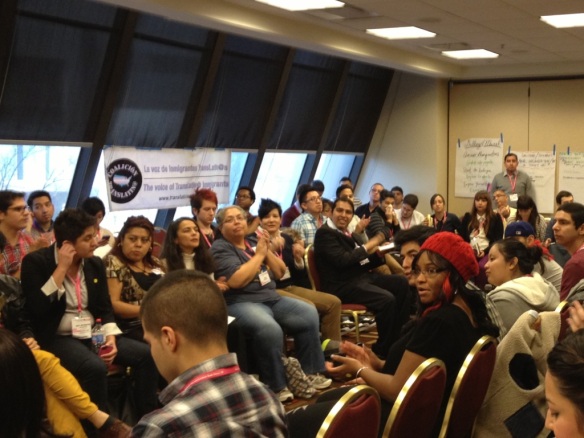 In 2012, Latinos voted in record numbers and provided decisive victories all over the country. It’s safe to say that we have arrived, politically speaking. In recognition of this power, we have mobilized in myriad ways to make it known to other that our community is a force to be reckoned with. It seems other communities have taken note.

Consider the LGBT rights movement. Like others, the LGBT community has realized the importance and the value of having Latinos on their side in the fight for equality. Outreach has been made to find ways to work together and NCLR is proud to be joining in the fight.

Judging by the standing-room only crowd, it’s clear that LGBT Latinos are also very interested in having these conversations. Topics ranging from marriage to immigration to family acceptance and the transgendered community were discussed at length today. The Latinos present understand the importance of this day-long gathering, but it’s important you understand why, too.

Check out Daniel Hernandez, our youngest LGBT elected official, talk about why he thinks it’s so important for the Latino and LGBT communities to work together.

So where do we go from here? That’s what we’re here to find out. At least on the immigration front, we have an idea. Not only is talk of reform a big part of the Latino Institute, but the Task Force has also made it a prominent part of the entire conference in general. This is a very positive move for the Task Force and we intend to continue the conversation with them and anyone else who wants to work together on getting this done. Will you join us to create change?

Error: Twitter did not respond. Please wait a few minutes and refresh this page.