For the first time in almost four years, national unemployment dropped below 8% to 7.8% in September. Although this is good news for all Americans, the outlook for Hispanic workers is much more mixed.

While the news is mostly good, our new Monthly Latino Employment Report also highlights workplace fatalities on the rise along with the falling Hispanic unemployment rate. Latino unemployment dropped below 10% for the first time since December 2008 (when it was 9.4%), though it remained about two percentage points higher than the national average. This represents an unfortunate trend for Latinos—disproportionate unemployment and participation in high-risk jobs. Despite this troubling reality, the Latino workforce participation rate, which measures how many people of working age are employed or looking for work, remained one of the highest of all ethnic demographics at 66.2%. A review of this data implies that Latinos are one of the hardest working groups of all Americans, and provides a compelling refutation of the negative stereotypes depicting our community as lazy and uninterested in working.

Many Hispanic workers participate in dangerous high-risk sectors such as landscaping, meat-packing, and poultry processing. In 2011, 729 Hispanics lost their lives, an increase from 707 people in 2010. In landscaping, Latinos represented almost half of all workers at 43.7%, and 167 lost their lives in 2011. Many of these deaths reflect the risky work environment facing often poorer foreign-born Hispanic workers, which alone comprised 69% of all Latino deaths. 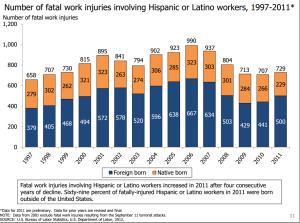 While the slow recovery and new job growth explains some of these higher fatality numbers, workplace conditions for these Latinos may be worsening. Although all American job fatalities decreased from 2010 to 2011, Latino fatalities increased.

Hardworking and resilient Latino workers should not have to put their lives on the line by working in dangerous and potentially fatal conditions on a daily basis. They deserve stronger protections from employers and relevant government agencies. The federal Office on Safety and Health Administration (OSHA) has a small budget and relies on only about seven inspectors for every one million U.S. workers. Their budget should be preserved and NCLR encourages OSHA to find new ways to increase reporting of dangerous conditions and to enforce simple but lifesaving workplace regulations to prevent death from heat exhaustion and falls.

Although the employment outlook is cautiously optimistic for all Americans, Latinos still face special challenges and bigger hurdles to finding a job and staying safe in the workplace. There remains much work to be done.

You can read the full Monthly Latino Employment Report here.